Sometime after 2025, an automaker will have the bragging rights to the first car to feature steel components made via a fossil-free production process. Specifically, instead of CO2 emissions, only H2O (water vapor) will be released during the conversion of iron ore to iron; then that iron will be made into steel. Imagine how that automaker’s environmental leadership, and marketing status, will be elevated.

“Automakers are very engaged and positive when we discuss HYBRIT Development”, says Thomas Hörnfeldt, VP of Sustainable Business at SSAB. “They are very aware of the forthcoming European Union Life Cycle Assessment (LCA) requirements for cars. LCA confirms to the automakers that, as cars go to zero-emission drivetrains, the CO2 embedded in car materials will be their next formidable challenge. Many automakers want to ‘stay ahead of the curve’ and be the first to market fossil-free steel from SSAB”

How likely is it that HYBRIT will meet its target? After all, direct reduction of iron (DRI) ore using hydrogen has been done in laboratories before. But scaling up the hydrogen process has never been attempted — until now. 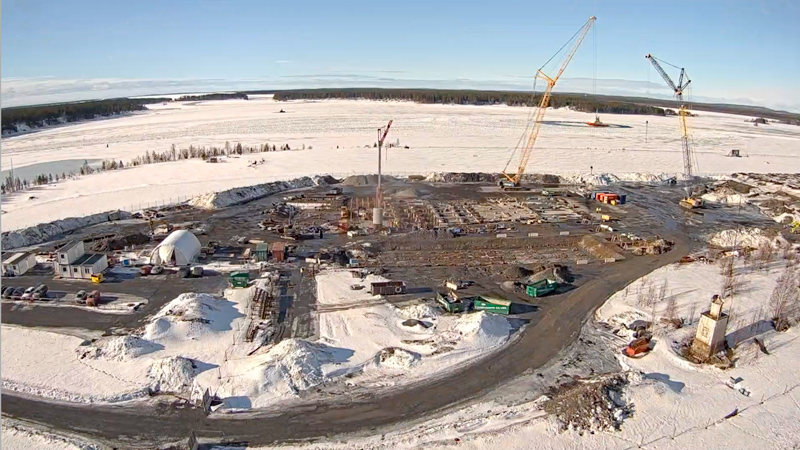 In the city of Luleå in the North of Sweden, the construction of the HYBRIT pilot plant is on schedule. The plant is being built by the HYBRIT partners: SSAB, LKAB — whose exceptionally pure iron ore deposits are nearby — and Vattenfall, who is committed to offering fossil-free energy in one generation. Test runs at the HYBRIT pilot plant are scheduled to begin next summer (2020).

“Yes, and some other steel companies now also realize the hydrogen process is really the only way to eliminate CO2 emissions at the source in the iron production,” says Hörnfeldt. “But to our knowledge, our initiative HYBRIT is much more substantial and is taking the lead in the steel industry. In fact, at the recent United Nation’s Climate Action Summit, we announced that we were moving up our production schedule by three years.”

One of the reasons SSAB and its partners are so convinced they are on the right path, is the result from the feasibility study completed in 2018. It had been calculated that fossil-free produced steel would have a 20% to 30% cost increase compared to traditional steel. But that difference keeps shrinking as: 1) the cost for carbon emissions increases, and 2) the cost of fossil-free electricity decreases.

But it gets even better

At times — for example, on summer days — the rivers are full (and producing hydro power) and wind mills are spinning, so Sweden is making more electricity than it consumes. But HYBRIT can take advantage of that “extra” renewable energy by using electrolysis to convert ordinary water to hydrogen. So green power will now be stored in the form of hydrogen, in vast, underground caverns, and ready for use by HYBRIT’s iron production.

“It’s a virtuous circle,” notes Hörnfeldt. “We can make sure that ‘extra’ power from renewable energy sources can profitably be put to work. Storing energy as hydrogen will also help stabilize the electrical grid.”

SSAB’s three other blast furnaces will also be converted to electric arc furnaces in the coming years.

“90% of our current CO2 emissions are from converting iron ore to iron using coking coal,” says Hörnfeldt. “HYBRIT will eliminate those CO2 emissions. But we are also working on the remaining 10% of our CO2 emissions, converting our heating processes to electricity wherever we can for our rolling and heat treatment operations. Where this is not possible – some processes require temperatures above 1000°C – we will be using bio-gas in the future.”

Meanwhile, LKAB is converting their equipment at their iron ore mines from running on hydrocarbons (oil, diesel, and gas) to running on electricity. Even the iron ore pellets they deliver to SSAB are becoming greener: waste wood by-products from Sweden’s forest industry will be fermented and turned into bio-gas and then used to power LKAB’s pellet plant.

Other steelmakers appear to be taking a much more incremental approach to hydrogen. Are SSAB and its partners “burning bridges” by aggressively moving into hydrogen-based iron production?

“We don’t think so,” replies Hörnfeldt. “Climate-change will cause everyone to move and think about solutions much faster than before — we have to, for the sake of our children and their children. But also, the 2018 HYBRIT feasibility study was very comprehensive and very convincing that this is the right path for steel. And the Swedish Energy Agency has done its own ‘due diligence.’ They are a major supporter of HYBRIT.”

“We are already looking into the possibility of building the demonstration plant 2025, three years ahead of plan, so that we can immediately thereafter produce iron ore-based, fossil-free steel for commercial use. The goal is to be selling fossil-free produced steel on a broad scale by 2035.”

“We are making a ‘clean-cut’ with traditional, carbon-intensive steelmaking technologies. We want to be world’s first fossil-free steel company.”